The Mare Tyrrhenum quadrangle contains a rich variety of features that include one of the planet’s oldest volcanoes, and many of the usual beautiful landscapes on the planet such as columnar jointing, craters, dunes, ridge networks, and even a landslide. In this article, some of the best pictures from a number of spacecraft will show what the landscape looks like in this region. The origins and significance of all features will be explained as they are currently understood.

Geography and origin of name

Most of the region contains heavily cratered highlands. The central part contains Tyrrhena Patera (a very old volcano). The Mare Tyrrhenum quadrangle encompasses parts of the regions Tyrrhena Terra, Hesperia Planum, and Terra Cimmeria. Mare Tyrrhenum's largest crater is Herschel. Licus Vallis and the Ausonia Montes are other major features in the region. The Mare Tyrrhenum quadrangle is one of a series of 30 quadrangle maps of Mars used by the United States Geological Survey (USGS). This quadrangle is also referred to as MC-22 (Mars Chart-22).[1] This quadrangle covers the area from 0° to 30° south latitude and 225° to 270° west longitude (135-90 E). Giovanni Schiaparelli named the area after Earth's Tyrrhenian Sea, which lies between Italy and Sicily. The region was subsequently renamed to Mare Tyrrhena after spacecraft photos revealed that it is an old, cratered plain rather than a sea.[2] [3]

The density of impact craters is used to determine the surface ages of Mars and other solar system bodies.[4] The older the surface, the more craters present. The floors of many craters have dunes. Dunes form in them because wind on Mars is not strong enough to lift sand grains all the way out of a crater. The Mare Tyrrhenum quadrangle lies in the southern hemisphere—an old region with many craters. The area around craters may be rich in minerals. On Mars, heat from an impact melts ice in the ground. Water from the melting ice dissolves minerals, and then deposits them in cracks or faults that were produced with the impact. This process, called hydrothermal alteration, is a major way in which ore deposits are produced. Perhaps this process will have made the area around Martian craters rich in useful ores for the future colonization of Mars.[5]

Close-up of depression on crater floor, as seen by HiRISE under HiWish program. Rectangle represents the size of a football field.

The crater Auki shows ridge networks that some researchers believe to be evidence of hydrothermal processes that occurred after impact. Impacts fracture rock and create enormous amounts of heat. On Mars, this heat can cause ice to melt and then force the resulting water to move through cracks that were generated during impact. This water will eventually deposit minerals. Mineral deposits may become evident when surrounding ground erodes. Deposits formed in this manner are more resistant to erosion. Researchers have speculated that these hydrothermal effects should be common on Mars.[6] Ridges found in and around the center of Auki are evidence of hydrothermal processes. This crater contains ridges that may have been produced after fractures formed as a result of an impact. Using instruments on the Mars Reconnaissance Orbiter they found the minerals smectite (clay), silica, zeolite, serpentine, carbonate, and chlorite that are common in impact-induced hydrothermal systems on Earth.[7] [8] [9] [10] [11] [12] Evidence of other hydrothermal systems around craters other than Auki has been found by different groups of scientists.[13] [14] [15]

Close view of central portion of Auki, as seen by HiRISE Arrow indicates ridges. Sand dunes are present near the top of the image.

There is enormous evidence that water once flowed in river valleys and channels on Mars. Images of curved channels have been seen in images from Mars spacecraft dating back to the early 70's with the Mariner 9 orbiter.[16] [17] [18] [19] Vallis (plural valles) is the Latin word for 'valley. It is used in planetary geology for the naming of features on other planets, including what could be old river valleys that were discovered on Mars, when probes were first sent to Mars. The Viking Orbiters caused a revolution in our ideas about water on Mars; river valleys were found in many areas. Spacecraft cameras showed that floods of water broke through dams, carved deep valleys, eroded grooves into bedrock, and traveled thousands of kilometers.[20] [21] [22]

Linear ridge networks are found in various places on Mars in and around craters.[23] Ridges often appear as mostly straight segments that intersect in a lattice-like manner. They are hundreds of meters long, tens of meters high, and several meters wide. Scientists are not totally sure what caused these ridges, but one popular idea is that impacts created fractures in the surface, these fractures later acted as channels for fluids. Fluids hardened. With the passage of time, surrounding material was eroded away, thereby leaving hard ridges behind. Since the ridges occur in locations with clay, these formations could serve as a marker for past water because clay requires water to be produced.[24] [25] [26] Water here could have supported past life in these locations. Clay near these structures could preserve fossils or other traces of past life.

Sand dunes have been found in many places on Mars. They are usually in low spots—like crater floors. In HiRISE images they can appear in a variety of pretty colors. The colors are somewhat artificial. NASA modifies colors to determine mineral composition. The presence of dunes shows that the planet has an atmosphere with wind, for dunes require wind to pile up the sand. Although Mars has strong winds at times, we must remember that the Martian atmosphere is only about 1 % as dense as the Earth's. Hence, a wind speed of a 60-mph storm on Mars would feel more like 6 mph (9.6 km/hr).[27] Most dunes on Mars are black because of the weathering of the volcanic rock basalt.[28] [29] Black sand can be found on Earth on Hawaii and on some tropical South Pacific islands.[30] Sand is common on Mars due to the old age of the surface that has allowed rocks to erode into sand. Dunes on Mars have been observed to move many meters.[31] [32] [33] For a dune to move, sand moves up the windward side and then falls down the leeward side of the dune, thus caused the dune to go toward the leeward side (or slip face).[34] When iimages are enlarged, some dunes on Mars display ripples on their surfaces.[35]

Many places on Mars show rocks arranged in layers. Rock can form layers in a variety of ways. Volcanoes, wind, or water can produce layers.[36]

Lava flows sometimes cool to form large groups of more-or-less equally sized columns.[37] [38] These joints have been seen on Mars.[39]

Other views in Mare Tyrrhenum quadrangle 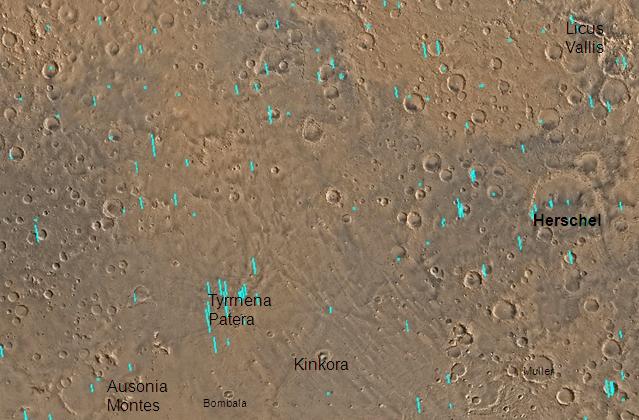 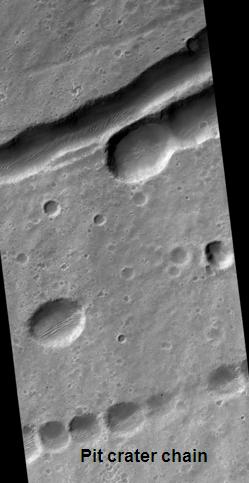