Wislicenus Crater and the Schiaparelli basin crater contain layers, also called strata. Many places on Mars show rocks arranged in layers.[3] Sometimes the layers are of different colors. Light-toned rocks on Mars have been associated with hydrated minerals like sulfates. The Mars Rover Opportunity examined such layers close-up with several instruments and detected clay (also called phyllosilicates if you like big words) and found out that light-toned rocks often contain hydrated minerals. Both need water to form. These minerals were mapped with instruments on orbiting spacecraft, but the rover on the ground supplied ground truth. Scientists are excited about finding hydrated minerals such as sulfates and clays on Mars because they are usually formed in the presence of water.[4] Places that contain clays and/or other hydrated minerals would be good places to look for evidence of life.[5] In plain words, if we see light-toned materials, we suspect water once existed there.

Rock can form layers in a variety of ways. Volcanoes, wind, or water can produce layers.[6] Layers can be hardened by the action of groundwater. Martian ground water probably moved hundreds of kilometers, and in the process it dissolved many minerals from the rock it passed through. When ground water surfaces in low areas containing sediments, water evaporates in the thin atmosphere and leaves behind minerals as deposits and/or cementing agents. Consequently, layers of dust could not later easily erode away since they were cemented together. On Earth, mineral-rich waters often evaporate forming large deposits of various types of salts and other minerals. Sometimes water flows through Earth's aquifers, and then evaporates at the surface just as is hypothesized for Mars. One location this occurs on Earth is the Great Artesian Basin of Australia.[7] On Earth the hardness of many sedimentary rocks, like sandstone, is largely due to the cement that was put in place as water passed through. 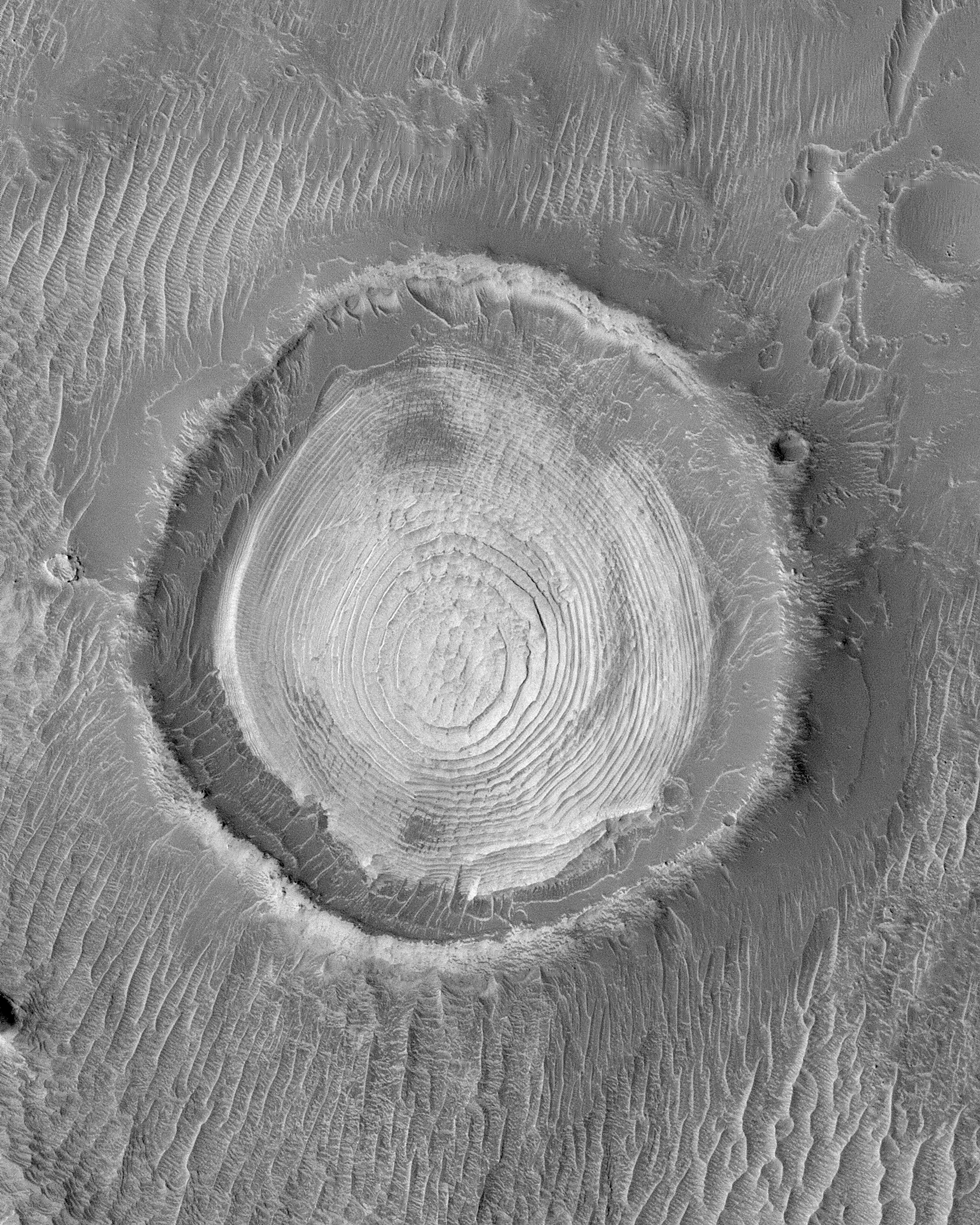 Schiaparelli is an impact crater located near Mars's equator. It is 461 km in diameter and located at latitude 3° south and longitude 344° W. Some places within Schiaparelli show many layers that may have formed by the wind, volcanoes, or deposition under water. Some are quite beautiful as shown in the pictures above and below. People often seek to travel to our national parks like the Grand Canyon to see layers like the ones in Schiaparelli.

When a comet or asteroid collides at a high rate of speed with the surface of Mars, it creates a primary impact crater. The primary impact may also eject significant numbers of rocks which eventually fall back to make secondary craters.[8] Secondary craters may be arranged in clusters. If secondary craters formed from a single, large, nearby impact, then they would have formed at roughly the same instant in time and be of the same age--which is how they appear below in the image of Denning Crater.

Impact craters generally have a rim with ejecta around them, in contrast volcanic craters usually do not have a rim or ejecta deposits. Sometimes craters expose layers that were buried. Rocks from deep underground are tossed onto the surface. Hence, craters can show us what lies deep under the surface. 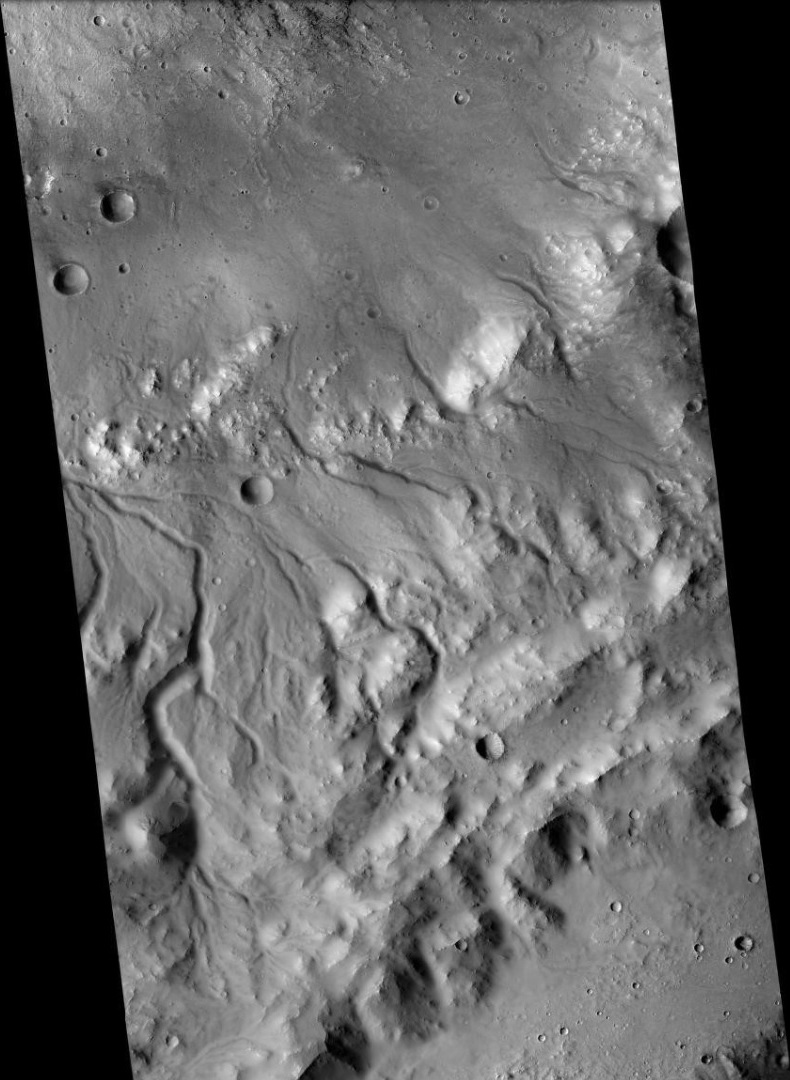 Within this quadrangle is Pollack crater, which has light-toned rock deposits. Mars has an old surface compared to Earth. While much of Earth's land surface is just a few hundred million years old, large areas of Mars are billions of years old. Some surface areas have been formed, eroded away, and then covered over with new layers of rocks. The Mariner 9 spacecraft in the 1970s photographed a feature that was called "White Rock." Newer images revealed that the rock is not really white, but that the area close by is so dark that the white rock looks really white.[9] It was thought that this feature could have been a salt deposit, but information from the instruments on Mars Global Surveyor demonstrated rather that it was probably volcanic ash or dust. Today, it is believed that White Rock represents an old rock layer that once filled the whole crater that it's in, but today the whitish rock has since been mostly eroded away. The picture below shows white rock with a spot of the same rock some distance from the main deposit, so it is thought that the white material once covered a far larger area.[10]

There is enormous evidence that water once flowed in river valleys on Mars.[11] [12] Images of curved channels have been seen in images from Mars spacecraft dating back to the early seventies with the Mariner 9 orbiter.[13] [14] [15] [16] As Mars has been studied in the decades since Mariner 9, more and more river-like forms have been seen. Indeed, a study published in June 2017, calculated that the volume of water needed to carve all the channels on Mars was even larger than the proposed ocean that the planet may have had. Water was probably recycled many times from the ocean to rainfall around Mars.[17] [18]

Many crater contained lakes. Some craters in the Sinus Sabaeus quadrangle are believed to have formed from the melting of glaciers on their rims. Inverted streams are found on the floors of some craters. Water from glaciers carried debris in channels and consequently that debris was left behind after the surrounding ground eroded.[19] [20]