The Noachis quadrangle covers the area from 30° to 65° south latitude and 300° to 360° west longitude (60-0 E). It lies between Argyre and Hellas, two giant impact basins on Mars. The Noachis quadrangle includes Noachis Terra and the western part of Hellas Planitia, which are classical names for regions on Mars. The name "Noachis" means the land of Noah. Noachis is considered among the oldest regions on Mars since it is so densely covered with impact craters. The oldest parts of Mars have the designation of “Noachian age." In addition, many previously buried craters are now coming to the surface.[1] Noachis' extreme age has allowed ancient craters to be filled, and once again become newly exposed. Much of the surface in Noachis quadrangle shows a scalloped topography in which the disappearance of ground ice has left depressions.[2] The first piece of human technology to land on Mars landed (crashed) in the Noachis quadrangle. It was the Soviet's Mars 2 that crash landed at 44.2 S and 313.2 W. It weighed about one ton. The automated craft attempted to land in a giant dust storm and in an area that has many dust devils.[3]

Certain regions of Mars display scalloped-shaped depressions. The depressions are believed to be the remains of an ice-rich mantle deposit. Scallops are created when ice sublimates from frozen soil.[4] [5] This mantle material probably fell from the air as ice formed on dust when the climate was different due to changes in the tilt of the Mars pole.[6] The scallops are typically tens of meters deep and from a few hundred to a few thousand meters across. They can be almost circular or elongated. Some appear to have coalesced, thereby causing a large heavily pitted terrain to form. A study published in Icarus, found that the landforms of scalloped topography can be made by the subsurface loss of water ice by sublimation under current Martian climate conditions. This model predicts similar shapes when the ground has large amounts of pure ice, up to many tens of meters in depth.[7] The process of producing the terrain may begin with sublimation from a crack because there are often polygon cracks where scallops form.[8] In other words, when we see this type of surface, we know there is probably ice in the ground. Future astronauts may mine this terrain for water. 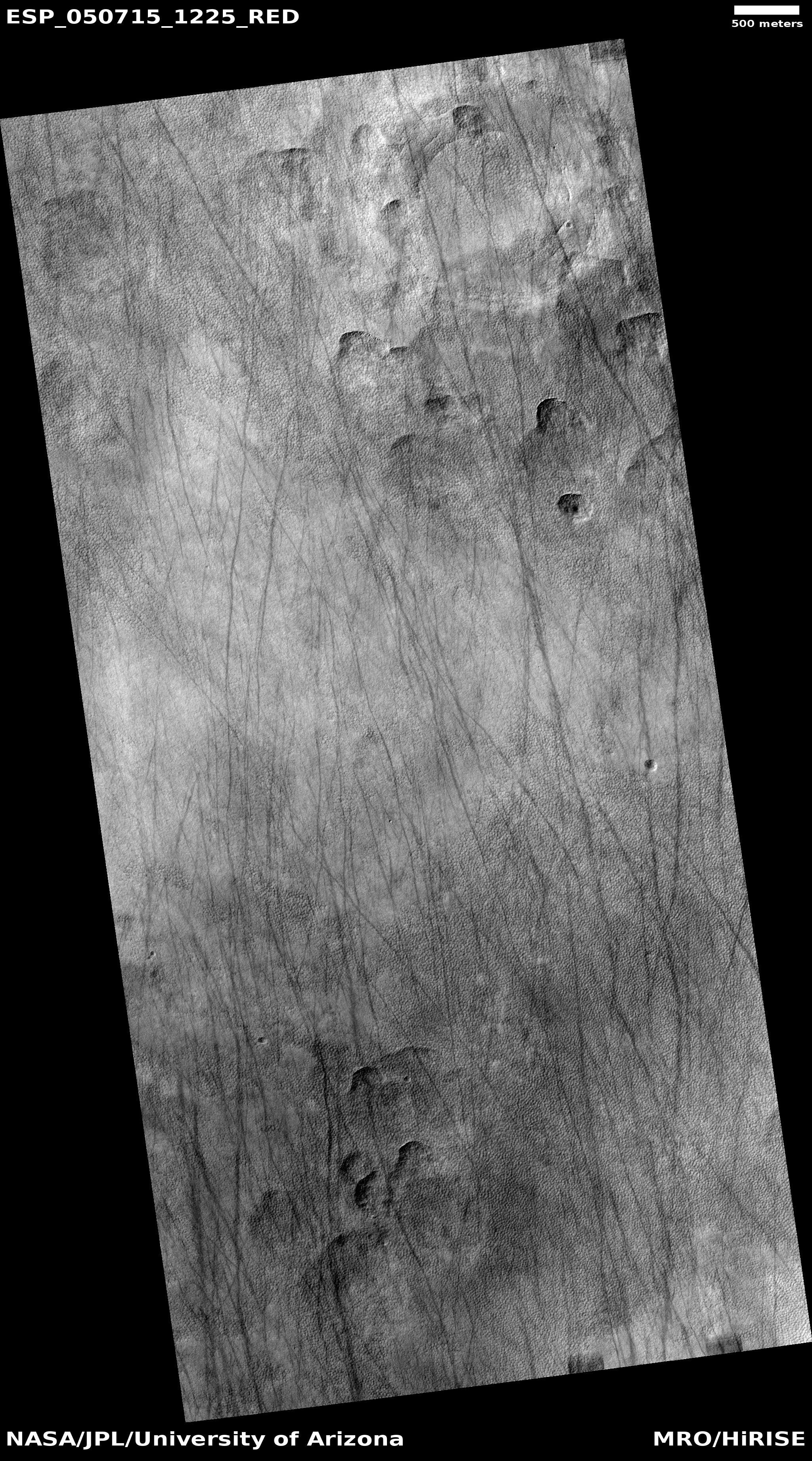 Many areas on Mars experience the passage of giant dust devils. A thin coating of fine bright dust covers most of the Martian surface. When a dust devil goes by it blows away the coating and exposes the underlying dark surface creating tracks. It does not take too much fine dust to cover those tracks--experiments in Earth laboratories demonstrate that only a few 10's of microns of dust will be enough. The width of a single human hair ranges from approximately 20 to 200 microns (μm); consequently, the dust that can cover dust devil tracks may only be the thickness of a human hair.[9] Dust devils have been seen from the ground and from orbit. They have even blown the dust off of the solar panels of the two Mars Exploration Rovers (Spirit and Opportunity), thereby greatly extending their lives.[10] The twin Rovers were designed to last for 3 months, instead they lasted many years with Opportunity lasting over 14 years. The pattern of the dust devil tracks have been shown to change every few months.[11] One study that combined data from the High Resolution Stereo Camera (HRSC) and the Mars Orbiter Camera (MOC) found that some large dust devils on Mars have a diameter of 700 meters and last at least 26 minutes.[12] The image below of Russel Crater shows changes in dust devil tracks over a period of only three months, as documented by HiRISE.

When there are perfect conditions for producing sand dunes, (steady wind in one direction and just enough sand), a barchan sand dune forms. Barchans have a gentle slope on the wind side and a much steeper slope on the lee side where horns or a notch often forms.[13] One picture below shows a definite barchan.

Gullies on steep slopes are found in certain regions of Mars. Many ideas have been advanced to explain them. Formation by running water when the climate was different is a popular idea. Recently, because changes in gullies have been seen since HiRISE has been orbiting Mars, it is thought that they may be formed by chunks of dry ice moving down slope during spring time. Gullies are one of the most interesting discoveries made by orbiting space craft.[14] [15] [16] [17]

The Hellas floor contains some strange-looking features. One of these features is called "banded terrain."[18] [19] [20] This terrain has also been called "taffy pull" terrain, and it lies near honeycomb terrain, another strange surface.[21] Banded terrain is found in the north-western part of the Hellas basin. This is the deepest part of the Hellas basin. The banded-terrain deposit displays an alternation of narrow band shapes and inter-bands. The sinuous nature and relatively smooth surface texture suggesting a viscous flow origin. A study published in Planetary and Space Science found that this terrain was the youngest deposit of the interior of Hellas. They also suggest in the paper that banded terrain may have covered a larger area of the NW interior of Hellas. The bands can be classified as linear, concentric, or lobate. Bands are typically 3–15 km long, 3 km wide. Narrow inter-band depressions are 65 m wide and 10 m deep.[22] Researchers do not at this time understand how these features ere formed. .[23] [24] Pictures of these features can look like abstract art. 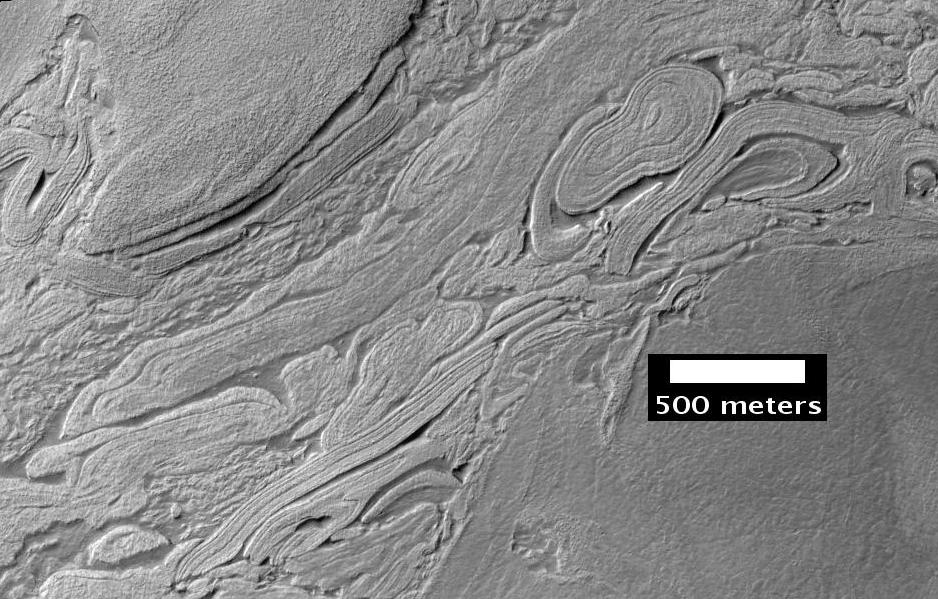 Twisted Terrain in Hellas Planitia, but actually located in Noachis quadrangle. Imagine trying to walk across this. Image taken with HiRISE.

Gullies are found on some dunes. These are somewhat different than gullies in other places, like the walls of craters. Gullies on dunes seem to keep the same width for a long distance and often just end with a pit, instead of an apron. Many of these gullies are found on dunes in Russell Crater.

Other scenes from Noachis quadrangle