The face on Mars is found in the lower right corner or the Mare Acidalium quadrangle, between the craters Aranda and Bamberg in the Cydonia Labyrinthus region.

The Mare Acidalium quadrangle contains many interesting features, but is most famous for an eroded mesa that looked like a face when originally seen in Viking images in the 70’s. Outstanding views of polygonal ground, mud volcanoes, gullies, and channels are here. In this article, some of the best pictures from a number of spacecraft will show what the landscape looks like in this region. The origins and significance of all features will be explained as they are currently understood.

Many regions with classical names are located here. Most of the region called Acidalia Planitia is found in Acidalium quadrangle. Parts of Tempe Terra, Arabia Terra, and Chryse Planitia are also in this quadrangle. This area contains many bright spots on a dark background that may be mud volcanoes. Lomonosov Crater and Kunowsky Crater are easily seen. The famous "face" on Mars is located in the Cydonia Mensae area--the southeastern part of quadrangle.

The quadrangle contains many interesting features, including gullies and possible shorelines of an ancient northern ocean. Some areas are densely layered. The boundary between the southern highlands and the northern lowlands lies in Mare Acidalium.[3] The Cydonia Region includes the Face on Mars (located near 40.8 degrees north and 9.6 degrees west). When Mars Global Surveyor examined it with high resolution, the face turned out to just be an eroded mesa.[4] Mare Acidalium contains the Kasei Valles system of canyons. This huge system is 300 miles wide in some places—Earth's Grand Canyon is only 18 miles wide.[5]

Mare Acidalium (Acidalian Sea) is the name of a classical albedo features on Mars located at 45° N and 330° E on Mars. The feature was named for a well or fountain in Boeotia, Greece. According to classical tradition, it is a location where Venus and the Graces bathed.[6] The name was approved by the International Astronomical Union (IAU) in 1958.[7] 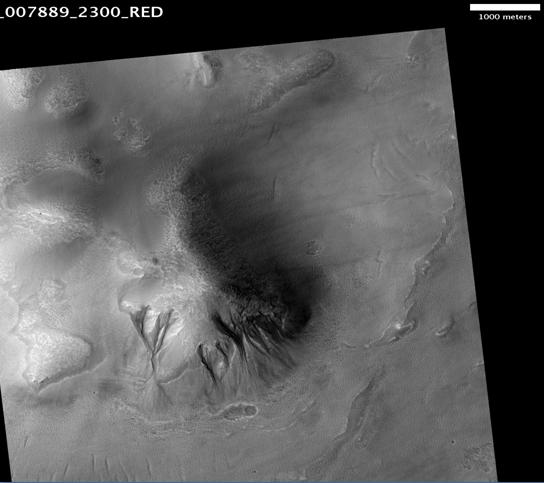 Acidalia Colles Gullies and other features, as seen by HiRISE The scale bar is 1,000 meters long.

The HiRISE image above of Acidalia Colles shows gullies in the northern hemisphere. Gullies occur on steep slopes, especially craters. Gullies are believed to be relatively young because they have few, if any craters, and they lie on top of sand dunes which are themselves young. Usually, each gully has an alcove, channel, and apron. Many researchers believed that the processes carving the gullies involved liquid water. However, with more observations and research this idea was changed. As soon as gullies were discovered, researchers began to image many gullies over and over, looking for possible changes. By 2006, some changes were found.[8] Later, with further analysis it was determined that the changes could have occurred with dry granular flows rather than being driven by flowing water.[9] [10] [11] With continued observations many more changes were found in Gasa Crater and other craters.[12] With more repeated observations, more and more changes were found; since the changes occur in the winter and spring, experts are tending to believe that gullies were formed from dry ice. Before-and-after images demonstrated the timing of this activity coincided with seasonal carbon-dioxide frost changes, and at temperatures that would not have allowed for liquid water. The conditions during gully formation are just about right to allow chunks of dry ice to slide down slopes. In addition, when dry ice frost changes to a gas, it may lubricate dry material to flow especially on steep slopes.[13] [14][15] In some years frost build up may be-as thick as 1 meter.

Impact craters generally have a rim with ejecta around them, in contrast volcanic craters usually do not have a rim or ejecta deposits.[23] Sometimes craters display layers. Since the collision that produces a crater is like a powerful explosion, rocks from deep underground are tossed unto the surface. Hence, craters can show us what lies deep under the surface.

Large areas of Mare Acidalium display bright spots on a dark background. It has been suggested that these spots are mud volcanoes.[24] [25][26] More than 18,000 of these features, which have an average diameter of about 800 meters, have been mapped.[27] As more observations poured in over the years, more evidence supported the notion that these abundant bright marks are mud volcanoes. Mare Acidalium would have received large quantities of mud and fluids form outflow channels, so much mud may have accumulated there. The bright mounds have been found to contain crystalline ferric oxides. Mud volcanism may be highly significant because long lived conduits for upwelling groundwater could have been produced. These could have been habitats for micro organisms.[28] Mud volcanoes could have brought up samples from deep zones that could be gathered by robots.[29] The authors of an article in Icarus compare these Martian features to mud volcanoes found on the Earth. Their study using HiRISE images and CRISM data support the idea that these features are indeed mud volcanoes. Nanophase ferric minerals and hydrated minerals found with Compact Reconnaissance Imaging Spectrometer for Mars (CRISM) show that water was involved with the formation of these possible Martian mud volcanoes.[30] Scientists are excited that Mars may have mud volcanoes because these small volcanoes may have brought up samples of dirt that were not affected by the high radiation on the Martian surface. We may find evidence of past life in these volcanoes.

There is a 300 km long ancient river system in Idaeus Fossae. It is carved into the highlands of Idaeus Fossae, and it originated from the melting of ice in the ground after asteroid impacts. There is evidence that it was formed relatively recently. Dating has determined that the water activity came after most of the water activity ended at the boundary between the Noachian and Hesperian periods. Lakes and fan-shaped deposits were formed by running water in this system as it drained eastward into Liberta Crater and formed a delta deposit. Part of the drainage path is the Moa Valley.[31] [32]

There is much evidence that water once flowed in river valleys on Mars.[33] [34] Images of curved channels have been seen in images from Mars spacecraft dating back to the early seventies with the Mariner 9 orbiter.[35] [36] [37] [38] We have seen more and more channels with each orbiter mission to the Red Planet. Indeed, a study published in June 2017, calculated that the volume of water needed to carve all the channels on Mars was even larger than the proposed ocean that the planet may have had.[39][40]

Many researchers have suggested that Mars once had a great ocean in the north.[41] [42] [43] [44] [45] [46] [47] Much evidence for this ocean has been gathered over several decades. New evidence was published in May 2016. A large team of scientists described how some of the surface in Ismenius Lacus quadrangle was altered by two tsunamis. The tsunamis were caused by asteroids striking into an ocean. Both were thought to have been strong enough to create 30 km diameter craters. The first tsunami picked up and carried boulders the size of cars or small houses. The backwash from the wave formed channels by rearranging the boulders. The second came in when the ocean was 300 m lower. The second carried a great deal of ice which was dropped in valleys. Calculations show that the average height of the waves would have been 50 m, but the heights would vary from 10 m to 120 m. So, some large waves would have gone over a 36 story building.[48] Asteroids hitting an ocean on Mars are quite possible. Numerical simulations show that in this particular part of the ocean two 30 km in diameter would form every 30 million years. The implication here is that a great northern ocean may have existed for millions of years. One argument against an ocean has been the lack of shoreline features. But shoreline features may have been washed away by these tsunami events. The parts of Mars studied in this research are Chryse Planitia and northwestern Arabia Terra. These tsunamis affected some surfaces in the Ismenius Lacus quadrangle and in the Mare Acidalium quadrangle.[49] [50] [51] [52]

Pingos are believed to be present on Mars. They are mounds that contain cracks. These particular fractures were evidently produced by something emerging from below the brittle surface of Mars. Ice lenses, resulting from the accumulation of ice beneath the surface, possibly created these mounds with fractures. Ice is less dense than rock, so the buried ice rose and pushed upwards on the surface and generated these cracks. An analogous process creates similar sized mounds in arctic tundra on Earth. The name pingos is an Inuit word.[53] They contain pure water ice, so they would be a great source of water for future colonists on Mars.

Layered terrain is common on the Earth and on Mars. Water is usually involved with the formation of layers. Hence, when we see layers, there is the possibility of a lake or sea in the past.

Rock can be formed into layers in a variety of ways. Volcanoes, wind, or water can produce layers[54] Layers can be hardened by the action of groundwater. Martian ground water probably moved hundreds of kilometers, and in the process it dissolved many minerals from the rock it passed through. When ground water surfaces in low areas containing sediments, water evaporates in the thin atmosphere and leaves behind minerals as deposits and/or cementing agents.

Features close to Face on Mars

Here are some CTX images of area near the Face. These pictures show natural formations on Mars. In the area around the face are mesas, mud volcanoes, pedestal craters, and brain terrain. Many of the mesas are sitting on what looks like platforms. They may be from a change in sea level. There is strong evidence building that an ocean was once all through the northern lowlands. All of the features seen here are common on Mars, especially in this latitude. For more pictures and information about the face go to The The Face on Mars. 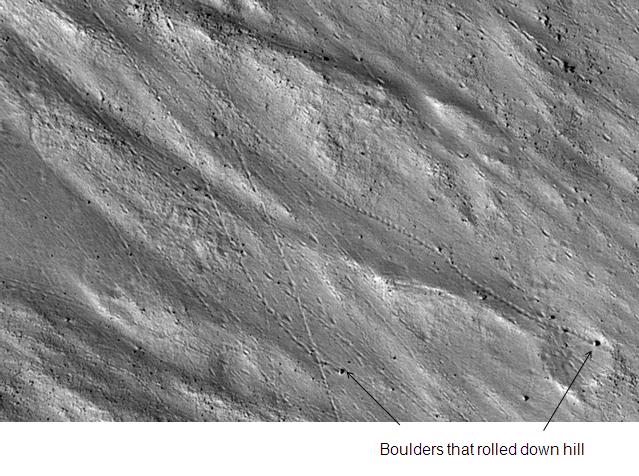 Boulders that are about 2.2 yards across (smaller than a bedroom) and their tracks after rolling down a cliff in Kasei Valles system, as seen by HiRISE