The Iapygia quadrangle covers the area from 0° to 30° south latitude and from 270° to 315° west longitude (90-45 E). Parts of the regions called Tyrrhena Terra and Terra Sabaea are found in this quadrangle. The largest crater in this quadrangle is Huygens, Some interesting and significant features in this quadrangle are dikes.[1] layers in Terby crater, and the presence of carbonates on the rim of Huygens crater.[2]

Near Huygens, especially just to the east of it, are a number of narrow ridges which appear to be the remnants of dikes, like the ones around Shiprock, New Mexico. The dikes were once under the surface, but have now been eroded. Dikes are magma-filled cracks that often carry lava to the surface. Dikes by definition cut across rock layers. Dikes form when magma rises up in a fault (crack) in the rock. They are generally hard and resistant to erosion; thus they are left standing as a wall after erosion has removed the softer ground around them. Some dikes on earth are associated with mineral deposits.[3] Discovering dikes on Mars means that perhaps future colonists will be able to mine needed minerals on Mars, instead of transporting them all the way from the Earth.

Some features look like dikes, but may be what has been called linear ridge networks.[4] Ridges often appear as mostly straight segments that intersect in a lattice-like manner. They are hundreds of meters long, tens of meters high, and several meters wide. One explanation for their existence is that impacts created fractures in the surface; these fractures later acted as channels for fluids. Fluids deposited hard minerals. With the passage of time, surrounding material was eroded away, thereby leaving hard ridges behind. However, this is only one idea. There are others. Scientists do not now agree on the exact cause of these features. Since the ridges occur in locations with clay, these formations could serve as a marker for clay which requires water for its formation. Water here could have supported life.[5] [6] [7]

Many places on Mars show rocks arranged in layers. Rock can form layers in a variety of ways. Volcanoes, wind, or water can produce layers.[8] A detailed discussion of layering with many Martian examples can be found in Sedimentary Geology of Mars.[9] Layers can be hardened by the action of groundwater. Martian ground water probably moved hundreds of kilometers, and in the process it dissolved many minerals from the rock it passed through. When ground water surfaces in low areas containing sediments, water evaporates in the thin atmosphere and leaves behind minerals as deposits and/or cementing agents. Consequently, a layer of dust that was put down in a dusty time, could not later be easily eroded away since it was cemented with hard minerals. It could then become a new, different layer.

Impact craters generally have a rim with ejecta around them, in contrast volcanic craters usually do not have a rim or ejecta deposits.[10] Sometimes craters will display layers in their walls. Since the collision that produces a crater is like a powerful explosion, rocks from deep underground are tossed unto the surface. Hence, craters can show us what lies deep under the surface. Many crater contained lakes. Some craters in the Iapygia quadrangle are believed to have formed from the melting of glaciers on their rims. This idea was arrived at from observations of inverted streams on the floors of craters. Water carried debris in channels and consequently that debris was left behind after the surrounding ground eroded.[11] [12] 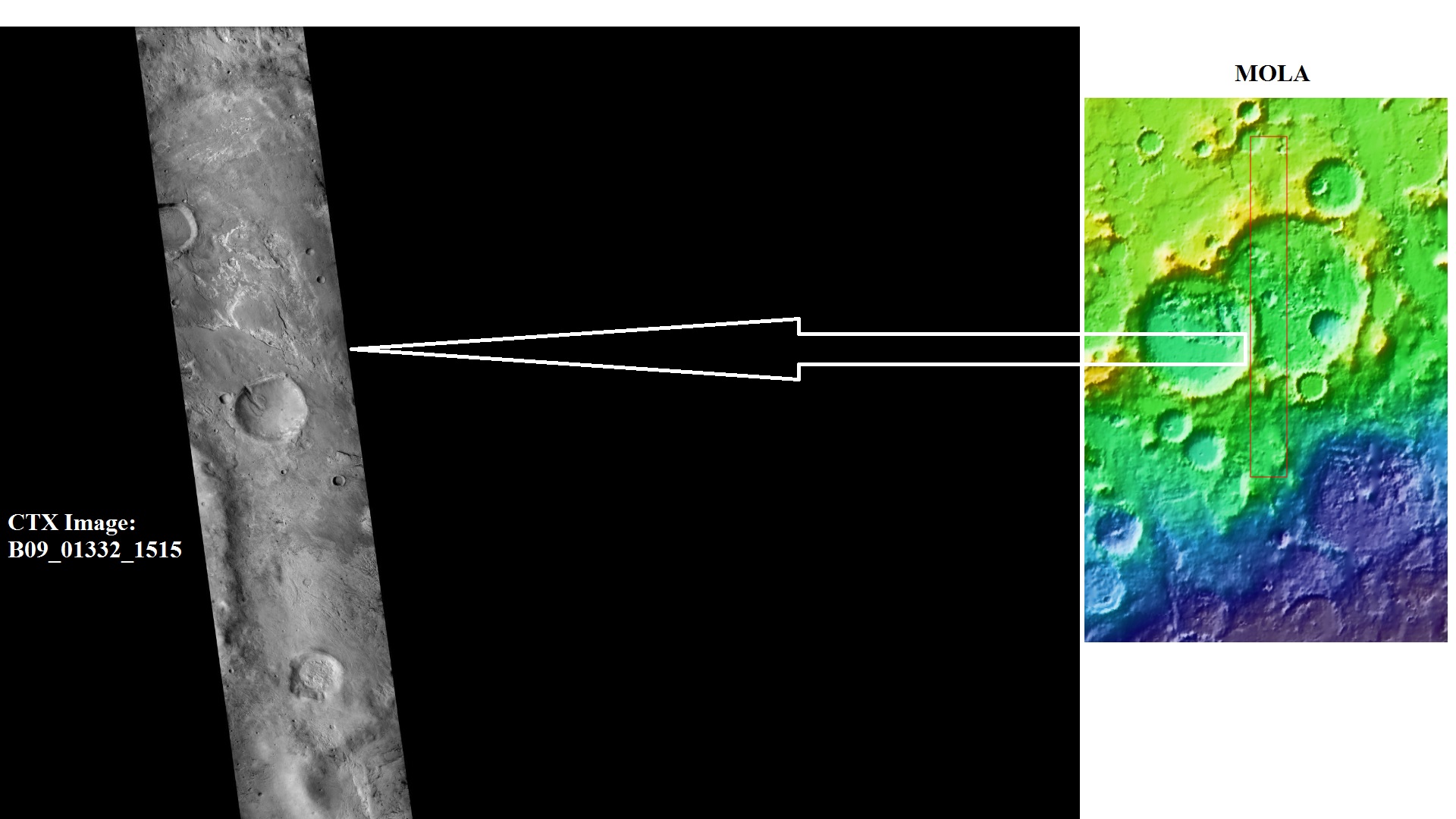 Niesten Crater, as seen by CTX camera (on Mars Reconnaissance Orbiter) and MOLA. MOLA colors show elevations. The CTX image came from the rectangle shown in the MOLA image.

Carbonates (calcium or iron carbonates) were discovered in a crater on the rim of Huygens Crater.[13] [14] The impact on the rim exposed material that had been dug up from the impact that created Huygens. These minerals represent evidence that Mars once was had a thicker carbon dioxide atmosphere with abundant moisture. These kinds of carbonates only form when there is a lot of water. They were found with the Compact Reconnaissance Imaging Spectrometer for Mars (CRISM) instrument on the Mars Reconnaissance Orbiter. Earlier, the instrument had detected clay minerals. The carbonates were found near the clay minerals. Both of these minerals form in wet environments. It is supposed that billions of years ago Mars was much warmer and wetter. At that time, carbonates would have formed from water and the carbon dioxide-rich atmosphere. Later the deposits of carbonate would have been buried. The double impact has now exposed the minerals. Earth has vast carbonate deposits in the form of limestone.

It is accepted that water once flowed in river valleys on Mars. Images of curved channels have been seen in images from Mars spacecraft dating back to the early seventies with the Mariner 9 orbiter.[15] [16] [17] [18] Vallis (plural valles) is the Latin word for valley. It is used in planetary geology for the naming of landform features on other planets that could be old river valleys. Such valleys were discovered on Mars, when probes first orbited Mars. In the seventies, the Viking Orbiters caused a revolution in our ideas about water on Mars; huge river valleys were found in many areas. Spacecraft cameras showed that floods of water broke through dams, carved deep valleys, eroded grooves into bedrock, and traveled thousands of kilometers.[19] [20] [21] Some valles on Mars (Mangala Vallis, Athabasca Vallis, Granicus Vallis, and Tinjar Valles) clearly begin at grabens. Grabens have a center section of rock lower than its sides; the sides are steep faults. On the other hand, some of the large outflow channels begin in rubble-filled low areas called chaos or chaotic terrain. It has been suggested that massive amounts of water were trapped under pressure beneath a thick cryosphere (layer of frozen ground), then the water was suddenly released, perhaps when the cryosphere was broken by a fault or large impact.[22] [23]

The Iapygia quadrangle contains some dunes. Dunes are common on Mars. The Martian surface is old—billions of year old—there has been a long time for rocks to break down into sand. Some dunes are barchans. Barchans occur where there is plenty of sand. When there are perfect conditions for producing sand dunes, steady wind in one direction and just enough sand, a barchan sand dune forms. Barchans have a gentle slope on the wind side and a much steeper slope on the lee side where horns or a notch often forms.[24] The whole dune may appear to move with the wind. Observing dunes on Mars can tell us how strong the winds are, as well as their direction. If pictures are taken at regular intervals, one may see changes in the dunes or possibly in ripples on the dune’s surface. On Mars dunes are often dark in color because they were formed from the common, volcanic rock basalt. In the dry environment, dark minerals in basalt, like olivine and pyroxene, do not break down as they do on Earth. Although rare, some dark sand is found on Hawaii which also has many volcanoes discharging basalt. Barchan is a Russian term because this type of dune was first seen in the desert regions of Turkistan.[25] Pictures below show sand dunes in this quadrangle. Some of the wind on Mars is created when the dry ice at the poles is heated in the spring. At that time, the solid carbon dioxide (dry ice) sublimates or changes directly to a gas and rushes away at high speeds. Each Martian year 30% of the carbon dioxide in the atmosphere freezes out and covers the pole that is experiencing winter, so there is a great potential for strong winds.[26] 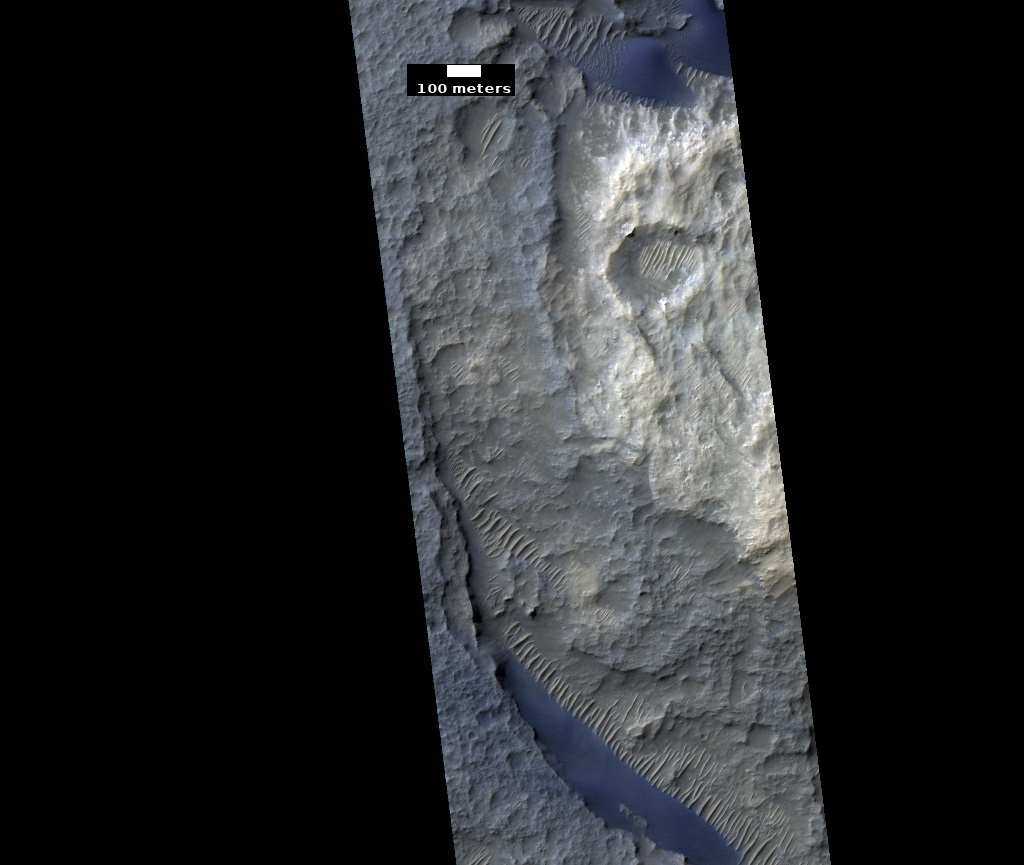 Other features in Iapygia quadrangle 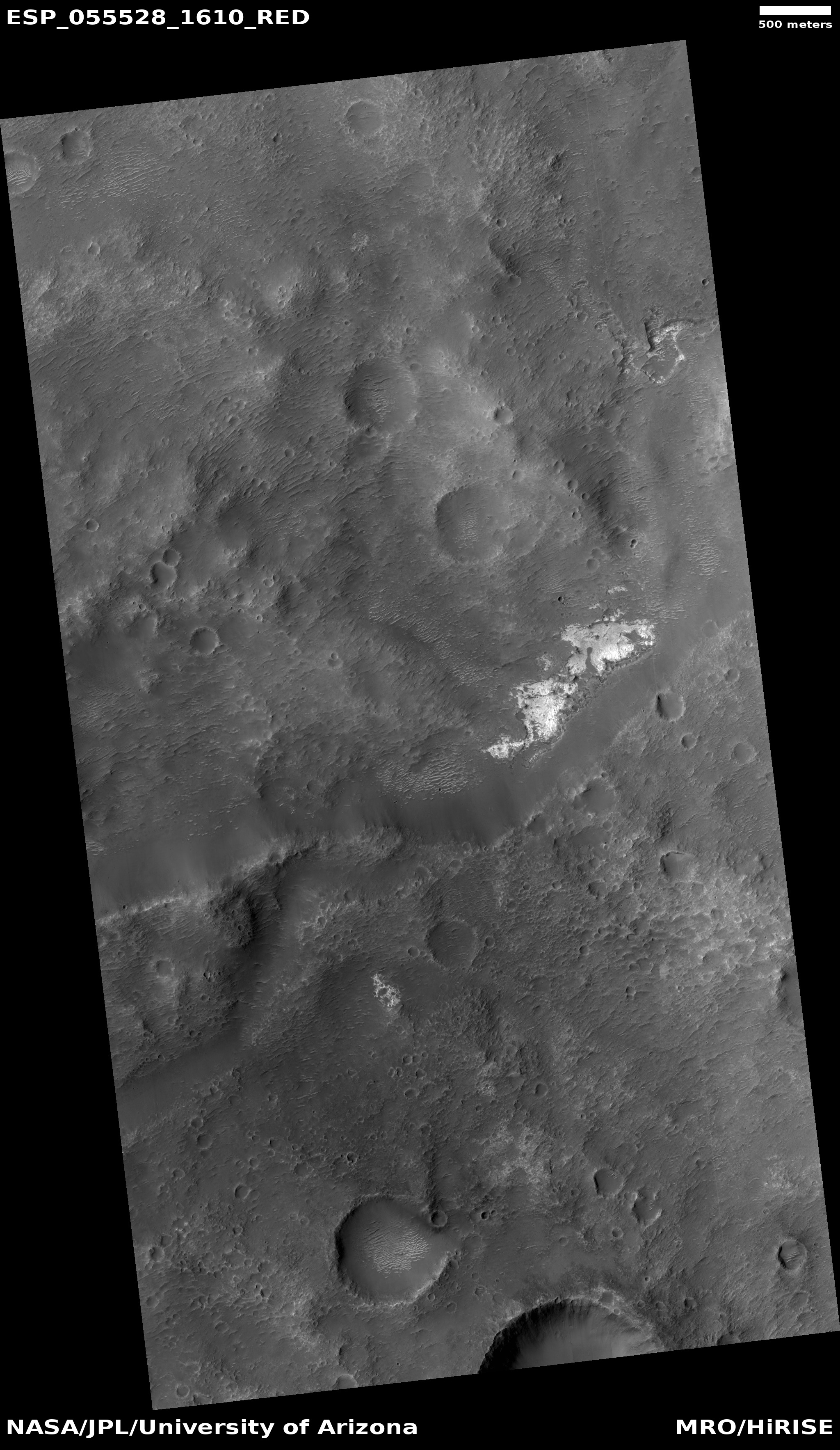